Read more about Kilkenny Heritage Forum
The Forum incorporates representatives from local government, government departments and state agencies, local heritage and community groups, local business, local development, the farming sector and the heritage professions. The Forum meets on a quarterly basis to guide and share information about the work programme depending on resources. The Heritage Office is responsible for managing the delivery of the Heritage Plan.

The Kilkenny Heritage Forum logo is the Autumn crocus (Colchicum autumnale).  In Ireland, the Autumn crocus is only found at a few sites in Kilkenny, specifically in the Nore valley, in damp meadows and on the river banks. As one of our rarest and most threatened plants it represents a facet of Kilkenny’s heritage.

Read more about the Autumn Crocus
In Ireland, the Autumn crocus is only found at a few sites in Kilkenny, specifically in the Nore valley, in damp meadows and on the river banks. As one of our rarest and most threatened plants it represents a facet of Kilkenny’s heritage.It is horticulturally significant, as it has an attractive flower and is frequently cultivated as a decorative plant. It was historically associated with religious settlements, such as at Jerpoint and Kells. The species has shown considerable decline in recent decades. It is categorised as endangered in the Irish red data book for vascular plants (Curtis and McGough 1988) and is protected under Section 21 of the Wildlife Act 1976. 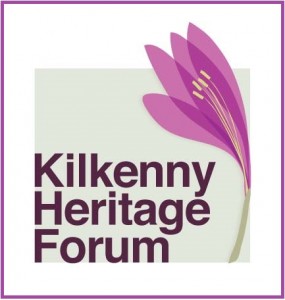 The Department of Arts, Heritage and the Gaeltacht are proposing the first ever National Cultural Policy – Culture 2025 – which will clearly articulate the important role of culture in our country and which will set out a road map for what we want to achieve in the cultural sector for the next 10 years leading up to 2025.

The County Kilkenny Heritage Plan is a five year strategic plan which sets out practical actions that are designed to identify, protect, promote and manage the heritage of the county.  The plan, which is the first of its kind for Kilkenny, is non-statutory and represents a new approach to heritage management in the county.  The Plan was developed by and is overseen by the Kilkenny Heritage Forum.

The Heritage Plan is relevant to a number of county level plans and policies. Kilkenny City and County Development Plans set out the overall strategy for the proper planning and sustainable development of the city and county of Kilkenny.  The County Kilkenny Heritage Plan plays an integral role in contributing to the main strategic aims of the County and City Development Plans.  Kilkenny’s Local Economic and Community Plan sets out the strategy for the economic, social and cultural development in the county; the Kilkenny Heritage Plan contributes to the achievement of priorities in this strategy.  The Heritage Plan also promotes the principle of local community involvement, which is at the heart of Local Agenda 21.

Read about the Kilkenny Biodiversity Plan
In 1992 the United Nations Conference on Environment and Development (also known as the “Earth Summit”) resulted in the signing of a number of agreements including the Convention on Biological Diversity.  Ireland, along with 188 countries has signed and ratified the Convention.  The three main goals of the Convention are: (i) the conservation of biodiversity; (ii) sustainable use of the components of biodiversity; (iii) the fair and equitable sharing of the benefits arising out of the utilization of genetic resources.  As part of Ireland’s obligations under this Convention, a National Biodiversity Plan was published in 2002.  Actions for Biodiversity 2011-2016, Ireland’s second National Biodiversity Plan, builds upon the achievements of the first plan, and focuses on actions that were not fully completed and addresses emerging issues. The plan recognises the important role of local authorities as key partners in delivering national objectives at a local level and the importance of heritage to the quality of life and sustainable development.